Warning: "continue" targeting switch is equivalent to "break". Did you mean to use "continue 2"? in /nfs/c03/h06/mnt/57865/domains/wiki.marvelit.com/html/languages/LanguageConverter.php on line 710
 Difference between revisions of "Editable Report Portlet" - MT Marvelit

The Editable Report Portlet allows you to create portlets to update data directly in your chosen database. It is useful in a number of ways:

1. Direct data entry into transaction tables to be used in dashboards
2. Updating of access and control information by specific users
3. Updating of reference information such as groups, offices, regions, etc.
4. Any other data entry or manipulation of dashboard tables.

The Data Entry Portlet works with an existing Report Portlet to display data in a list. See Report Portlet for specifics on creating a report using the report portlet.

For Example purposes - we have created a report the lists offices. A portion of the report portlet is on the left with the resulting report on the right.

It is important to note - that you should establish a single column in your table and designate that column as a primary key. The editable report uses this to update and insert new rows into the table. This key element should also be set up to auto increment - that way you do not have to worry about setting the key on inserts

Now that we have created a list to use in the editable report - we can configure the portlet. 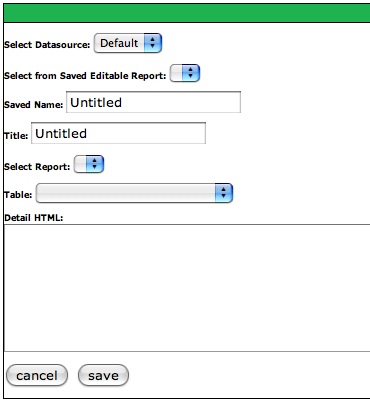 Select from Saved Editable Report - A list of editable reports for the selected datasource will be displayed.

Saved Name - the name to be used when you save the portlet. This name will be listed in the previous pulldown when saved.

Title - the title to be displayed on the data edit screen

Select Report - the name of the report portlet to be used to display data for edit or entry. In the example above it would be Entry Office List.

Table - this is the table name in your datasource that will be edited using the editable report portlet. In the above example - we would select the office table. When you select the table - the portlet adds the columns from that table to the portlet - see next image

Detail HTML - section to enter detailed html that will be used instead of the default edit screen. This is a complex function and should only be used if you are an experienced html developer. See Advanced functions for additional information

Save: Save changes and display the report. 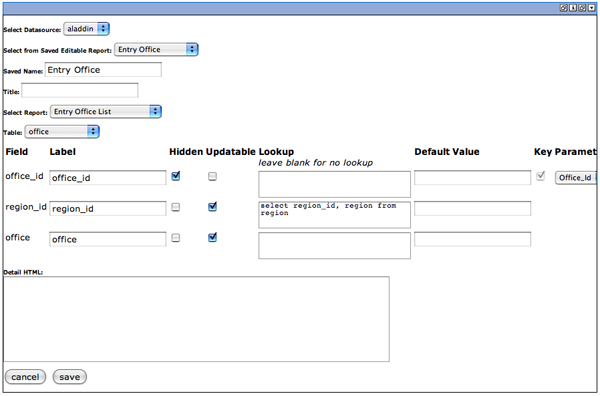